Erin Espinosa from the National Council on Crime and Delinquency conducted a webinar in April where she presented her research on pathways of the juvenile justice system.

The webinar, “Pathways Girls Take to and Through the Juvenile Justice System,” highlighted how mental health, trauma and gender all intertwine and affect the paths that juveniles take that may lead to their involvement in the juvenile justice system.

Espinosa discussed the differences in pathways girls take that increase their likelihood of involvement in the justice system versus boys, and said girls are detained for longer periods of time in comparison to boys.

Factors taken into account when analyzing a youth’s length of stay stemmed from ethnicity to mental health markers, she said in the webinar. Girls who have experienced trauma or received mental health treatment are likely to be incarcerated for longer periods of time, up to five days longer than boys, Espinosa said.

“Boys…none of that was a factor [trauma or mental health] — it was crime-related activity,” she said. “We keep boys locked up longer, essentially for criminogenic issues, and girls tend to stay longer for treatment issues.”

Aside from higher levels of traumatic experiences, girls of color additionally face higher rates of sexual abuse that contribute to their funneling within the system, Espinosa said in the webinar.

The National Center for Mental Health and Juvenile Justice reported that four out of five girls in the juvenile system reported experiencing some form of sexual abuse in their adolescence. Additionally, 35% of Latina girls under 18 experienced sexual abuse during their childhoods, according to a 2013 study by San Diego State University scholars.

Victimization endured by girls can translate to an increased likelihood of their involvement within the justice system. Factors of victimization can include such as adultification and hypersexualization.

DeLoach, a senior center coordinator in Iowa City, Iowa, said visibility of a body plays a role in the high levels of sexual abuse of Black women.

Black and Latina girls, in comparison to their White counterparts, are perceived to be less innocent and more adultlike, as highlighted in a report by The Georgetown Law Center on Poverty and Inequality. Further in the report, paradigms of Black femininity –– like Mammy and Sapphire –– are mentioned which emulate the idea of Blackness correlating with hypersexuality and aggression.

As mentioned in the report, the Mammy and Sapphire stereotypes originated during the period of slavery in the United States and portray Black women as “hypersexual” and “aggressive.”

The Sapphire paradigm reflects an angry and stubborn Black woman whereas the Mammy paradigm is that of a nurturing and loving mother-figure, as stated in the report.

Black girls are viewed as being adultlike in all stages of their childhood in comparison to White girls, as revealed in a study conducted by the Georgetown Law Center on Poverty and Inequality.

Iliana Pujols is a 22-year-old Latina who has been involved in the juvenile justice system in West Haven, Connecticut, since she was in fifth grade.

Pujols was charged with her first offense when she was 11, and she kept committing a variety of crimes, she said.

“I ended up going into my 18th birthday with about nine assaults,” she said. “I had like larceny, conspiracy, all kinds of things.”

Pujolos was suspended during her sophomore year of high school and soon after attended an alternative school, which she graduated from and said it was a great experience.

Pujols said from a young age she was expected to be mature and play the role of an adult. She was raised to sometimes “play the role of mom,” and on occasion act as the head of the household.

Appearance is also a factor of adultification — individuals are perceived as older despite being of a younger age. Pujols said she was often viewed as an aggressor due to her build and mature demeanor.

“The immediate assumption was that I was the aggressor because I was necessarily a little bit bigger than the other girl,” she said. “They thought I was over 18, but I’ve always presented myself as a very mature person, and an older person. So nobody knew that I was like 16 years old at the time.”

Though a Latina –– from Puerto Rican, Venezuelan and Dominican descent –– Pujols said she was often perceived as a younger white woman, which she said sometimes “played in her favor” in juvenile court.

Pujols mentioned she was often put in a lot of “privileged predicaments” during her encounters with the justice system, citing living in West Haven and passing as a white girl as contributing factors to her privilege.

Though Pujols was able to divert some consequences for her actions, her friends were not necessarily as lucky as she was. Recalling an instance where she and her friends got in trouble, Pujols mentioned that she might “get off with a ticket,” whereas her friend “might end up locked up for the night.”

Pujols said it’s important to approach incarcerated girls on a relational level. She recalled when she first began working at the Connecticut Juvenile Justice Alliance and spoke to an incarcerated girl who positively spoke about her experience with a counselor.

“One session in specific stood out to me when I had this conversation with this young lady, and she was like, I like my program because, like, I can talk to my counselor about sex and losing my virginity and having my period and what to use and stuff like that”  Pujols said.

Young girls are likely to go through changes while they are detained, ranging from hormonal changes to transitioning into a young woman.

“One of the things that we’ve heard come up a lot is the need for not only role models and credible messengers,” Pujols said, “but more specifically when it comes to females needing that emotional connection, no matter where you go.” 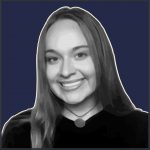 Nicole Sroka is a senior at the University of Illinois at Chicago where she is studying criminology, law and justice and communication. A native Chicagoan, Sroka analyzed the city’s homicide rate and created a data visualization on the opioid epidemic in Illinois for The Red Line Project. Sroka’s story “Concentrated Poverty and Criminality” about homicide rates earned her a first-place award in the 2019 regional Society of Professional Journalists Mark of Excellence Awards for best use of multimedia. Sroka was also a national finalist in its online category. A digital and visual artist, she strives to incorporate visuals into data-driven stories.